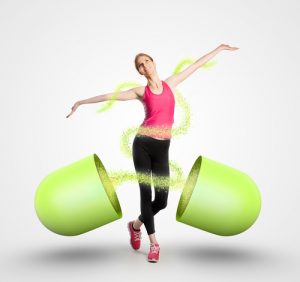 Everyone has ask “the question”. You’ve asked it. They’ve asked it. And being a Fitness Trainer, I’ve probably heard it asked a thousand times. “Why haven’t they invented a magical pill that would elevated the need to sweat away calories”?  I can honestly say that it hasn’t been from a lack of trying. You can bet scientist and lab technicians in every medical arena you can think of  have been working on this for decades . If such an endeavor were to ever manifest itself  into reality. It would instantly become the most sought after and the most  prescribed medication known to mankind. To give you a small snippet of what this would look like. Remember how things looked in front of every Apple store in the country after they announced this new technology age phone called the iPhone? People went absolutely banana’s over it and before you knew it everyone had to have one. Since then, a updated or new version seems to come out every 6 months or so and no matter how hard we try to resist, we all seem to get caught up in the the next wave of it’s technology.  Well, that would fail in comparison to the unveiling of the the first weight loss pill.  People would line up for miles and miles for days on end in hopes of getting their hands on this new phenomenon. Can you imagine the joy and excitement that would hit not only the public but the industries alike. Just the mere thought of obtaining a piece of its interest would set the business world on fire. People who have been told that they need to lose weight or suffer the dire consequences of not would absolutely flood the gates opportunity. At first glance this pill would save a nation that since 1980 has established that 1 and 3 of its  people are medically obese. think about it . in 2010 Mexico’s obesity rate was the highest in the world; the U.S. ranked second. Other countries with obesity rates between 20 percent and 27 percent included New Zealand (27 percent), Australia and the United Kingdom (25 percent), Canada (24 percent), Ireland (23 percent), Chile (22 percent), Iceland and Luxembourg (20 percent each). Countries with the lowest overall obesity rates include Japan (3 percent), Korea (4 percent), Switzerland (8 percent), Italy, Norway and Sweden (10 percent each. In all of the countries examined the average obesity rate was 16 percent. Imagine the affect this magical weight loss pill would have on the world.  The obesity statistics would be better than Japan and Korea.  But then …. i began to think about the ramifications  of it all. After looking at the big picture i began to realize that this Magical pill would actually destroy us all. Think about it … If you had a pill that would reduce your size, weight, circumference  Would you continue to exercise, pushing your body to the point of exhaustion. Would you continue to watch what you eat ? Consuming foods that were conducive to you keeping the body fat down? what motivation what you have to stay healthy? perhaps or perhaps not. its the perhaps not that concerns me. I thought about the implication of these few things and just those things alone would destroy humanity. 20 years after the miracle weight loss hit the market record numbers of heart conditions and strokes would began to arise due to lack of exercise and an over consumptions of fatty foods. High blood pressure and diabetic cases would began to climb for these same reasons. The only people that would actually  benefit from such a pill would be those who are actually benefiting from there not being one now. in the spirit of  innocent debate i will let you draw your own conclusions of whom those people or business might be. The fact of the matter is,  we could go on forever weighing the good and the bad implications of such a question while leaving room open for countless discussions on the matter but why entertain such things when the true magic lies within each one on of us. We have all have a magical pill that gives us the ability to accomplish anything we put our minds to. That pill has allowed us to accomplish far better and more rewarding thing than losing a few pounds here and there. place your hand across your chest and you’ll find it there content in spirit and full with determination.it requires no refills or  and theres no need for any prescriptions. Every time you strap on you shoes and head for the gym, go for a power walk  or off to spinning class. you will feel it pound with enthusiasm. thats your magic pill.  Every time you hear that little voice in your head that screams out one more! its sounds as if its coming from the mucked trainer your hire to motivated you but it really your magic pill. You don’t a manufactured pill to accomplish your goals Im master Trainer Reggie Stewart and I’m here to tell you that as long as you have a heart that magical pill will exist inside of you. all you have to do is tap into it. so the next time you hear the questions  What if there were a magic weight loss pill ? answer by tapping your heart and saying “there is , its inside of you.”